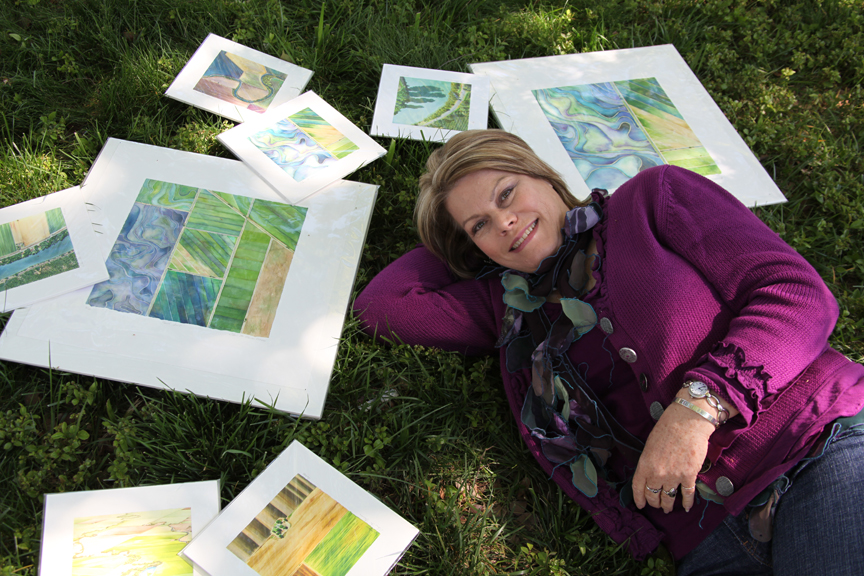 As a watercolor artist, Elaine Bowers has fond memories of making art as a young child.  Originally educated in graphic design, she later pursued the fine arts.  Watercolors became her preferred medium in which she developed a photo realistic style.  She enjoys painting intimate scenes of life, calling attention to perspectives a viewer may overlook.   Her aerial landscape paintings in watercolor feature the Sacramento Delta and surrounding farmlands which inspire her current series, "Earthscapes," which can take on an abstract pattern, while simultaneously reflecting her photo realistic style.  She flies in small aircraft to take aerial photos of the landscape from which to paint.  In her series “City of Trees,”  the local trees in Sacramento, California are featured.   Elaine also enjoys making ceramic clay sculpture and makes whimsical art featuring dogs, birds, birdhouses, masks and sand tray miniatures.  She studied under sculptor Yoshio Taylor and Frans Duckers of Holland.   She has won many awards and is honored to receive the AWS Bronze Medal of Honor in the 146th American Watercolor Society Annual International Exhibition, 2013.  She has also shown her work in Alushta, Crimea, USSR and has had her work featured as illustrations in a few books.  Elaine's art was used on the cover of "For Children Who Were Broken" by Elia Wise.  Her work has been shown at the Sacramento International Airport and most recently she was honored to be invited to Santa Marta, Colombia for the Triennial International Aquarella Exhibition.  Elaine's art has been featured on many covers of "Inside the City,"  a Sacramento newspaper.  She takes pride in being designated as a "Signature Status" member of both the American Watercolor Society (AWS) and the National Watercolor Society (NWS), which allows her to add NWS & AWS after her signature on her art.  Elaine teaches ceramic clay sculpture and watercolors to local school children and adults.

Additionally, Elaine worked as an art therapist with a private practice in Sacramento, California for 12 years supporting both children and adult clients with life challenges, such as trauma/abuse, PTSD, grief/loss.  She closed her practice in 2018 to pursue her art full time.

"For Children Who Were Broken"

"Castle on the Prarie"

Private Collections throughout US